“No deal” Brexit risks are on the rise to start the week after British Prime Minister Boris Johnson said the UK and EU should “move on” if no trade deal is agreed by October 15 and after the Financial Times reported that Johnson’s government is planning legislation to override parts of the Withdrawal Agreement it signed in January. While some analysts say the latter is media-overreaction to the UK’s Internal Market Bill to be released on Wednesday (which seeks to tie up well-known loose ends/ambiguities in the event of a worse-case scenario), sterling traders have decided to reprice-in the possibility of a “no-deal” outcome after months of completely pricing it out. This has sparked a 200pt drop for GBPUSD, a broad USD bid, and a risk-off tone to the broader markets which has now helped USDCAD break strongly back above the 1.3110s resistance level it lost on Friday. October WTI’s 7.5% plunge is adding some fuel to the fire and this seems to be a delayed reaction to the long weekend news of Saudi’s Aramco lowering its official selling prices (OSPs) to Asia amid signs of tepid demand.

Today’s North American calendar is a rather quiet one, which should leave traders focused on Brexit headlines and the fallout from Tesla not making the S&P500 late on Friday. The Nasdaq also looks like it may want to further punish the “Softbank whale” trades that were unmasked by ZeroHedge late last week as one of the big drivers behind this summer’s tech rally. This week’s key feature will be the Bank of Canada decision on Wednesday, but market participants aren’t expecting any major changes to the monetary policy statement, especially given the fact that there won’t be an MPR and a press conference afterwards…although Governor Tiff Macklem could provide soundbites on Thursday morning during his speech at the Canadian Chamber of Commerce.

This week’s calendar also features some US inflation data (August PPI on Thursday/August CPI on Friday) and a large 1.1BLN USDCAD option expiry at the 1.3225 strike on Friday. There won’t be any Fed-speak as the FOMC now enters its black-out period ahead of next week’s policy meeting. The leveraged funds at CME reduced their net long USDCAD position for the second week in a row during the week ending September 1, but we think this morning’s strong move through the 1.3110s now puts the short-term momentum on their side for a change. 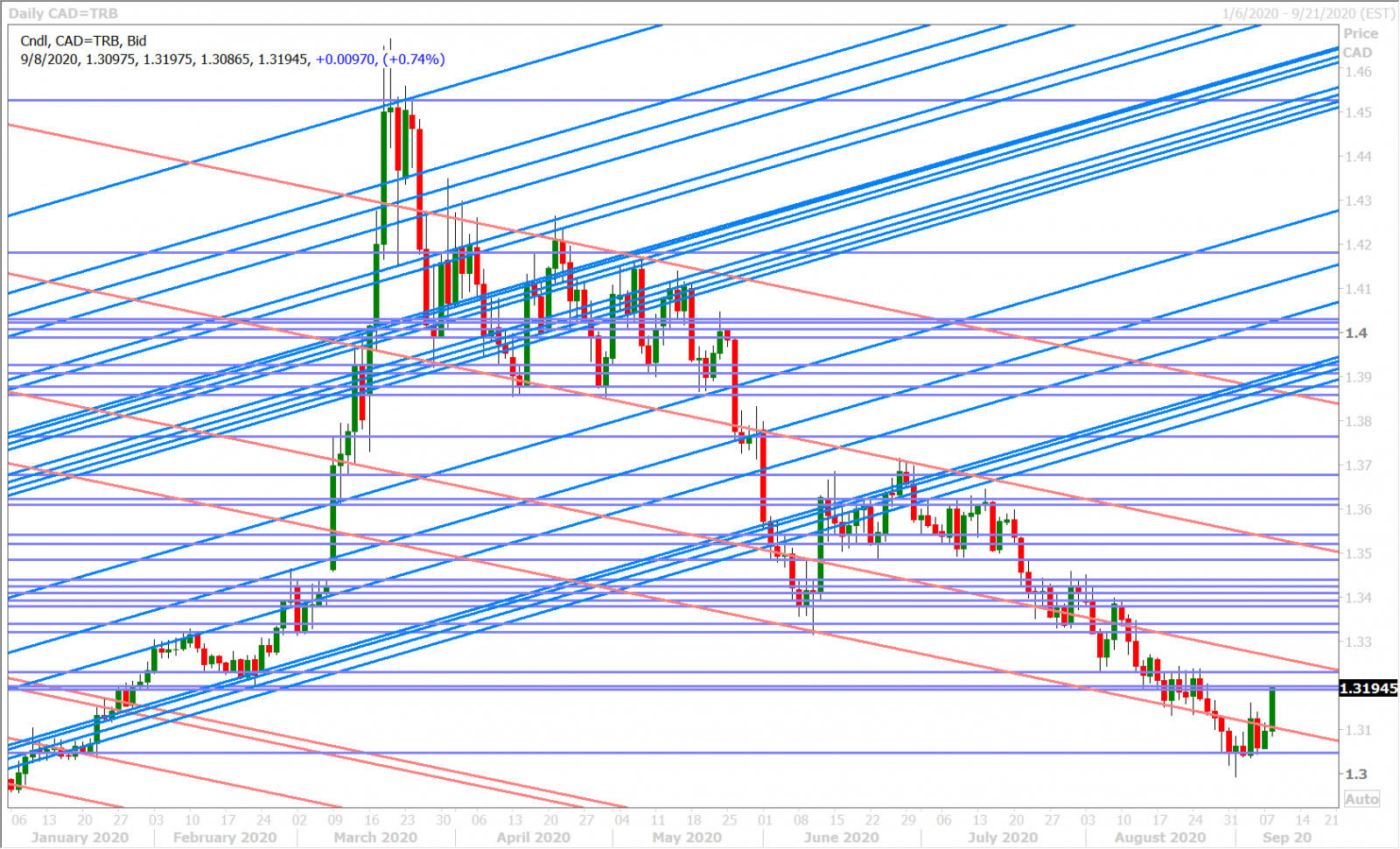 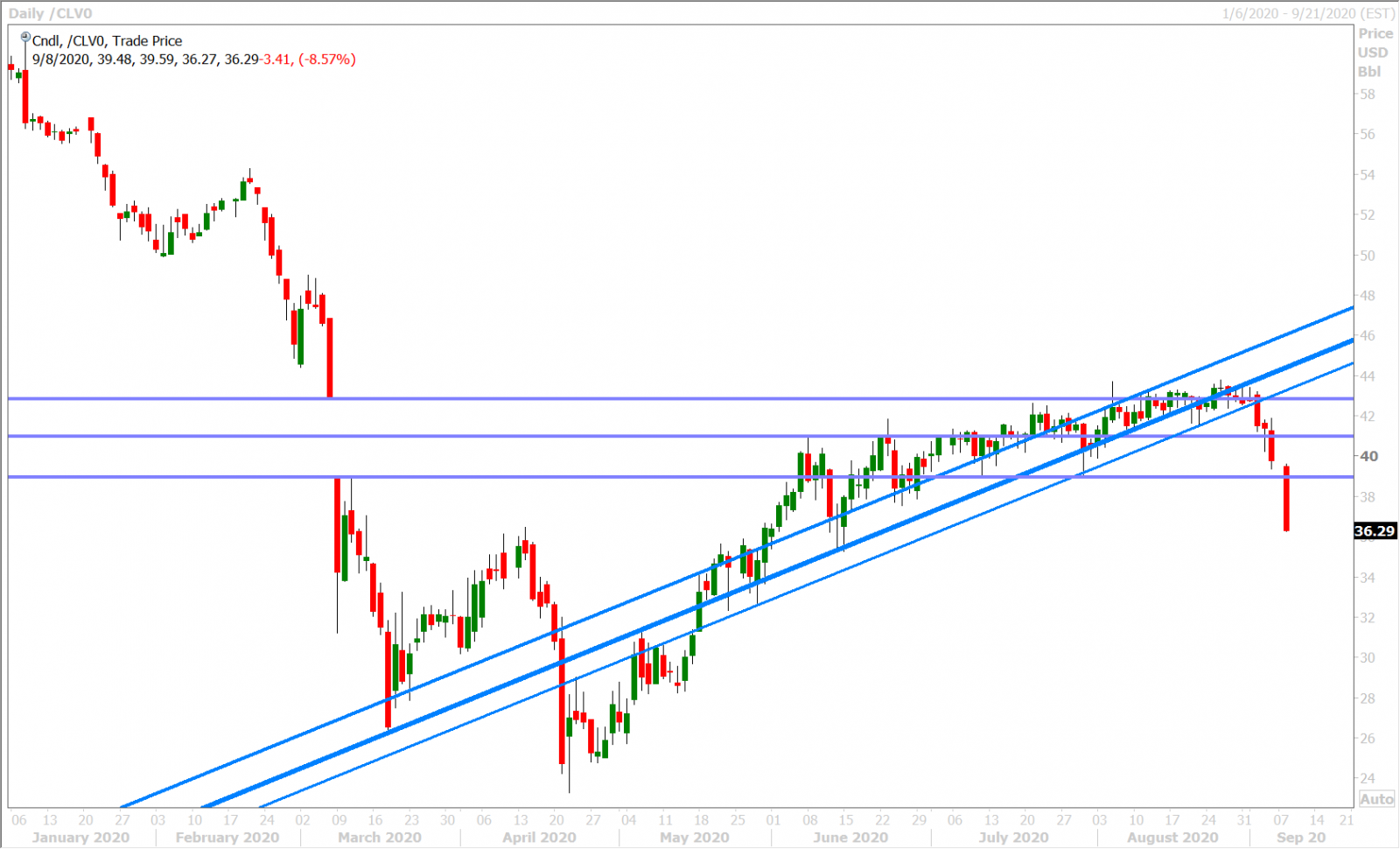 Euro/dollar is pulling back this morning amidst broad USD buying, but we’d note a continuation of the relative outperformance we first saw re-emerge during last Thursday’s stock market rout…and so we ask the question…does the marketplace want to start treating the Euro as a relative safe-haven again (like it did in February)…at least against risk currencies? Two days does not make a trend, but we’re going to keep watching this.

Weaker than expected German Industrial Output data didn’t have much effect on the market yesterday, nor did today’s soft German export data. This week’s key European feature will be the ECB meeting on Thursday, and market participants are now expecting Christine Lagarde to address the euro/dollar exchange rate in light of Philip Lane’s comments last week and the Financial Times article which said its ECB sources are now “worried” about it.

The leveraged funds trimmed back their record long EURUSD position by liquidating longs and adding to shorts during the week ending September 1, and it seems as though the market’s bearish reversal off 1.2000 was the trigger. Thursday’s large, post-ECB meeting, option expiries center around the 1.1775 to 1.1800 strikes (2.8BLN in total), which suggest EURUSD doesn’t do much until then. 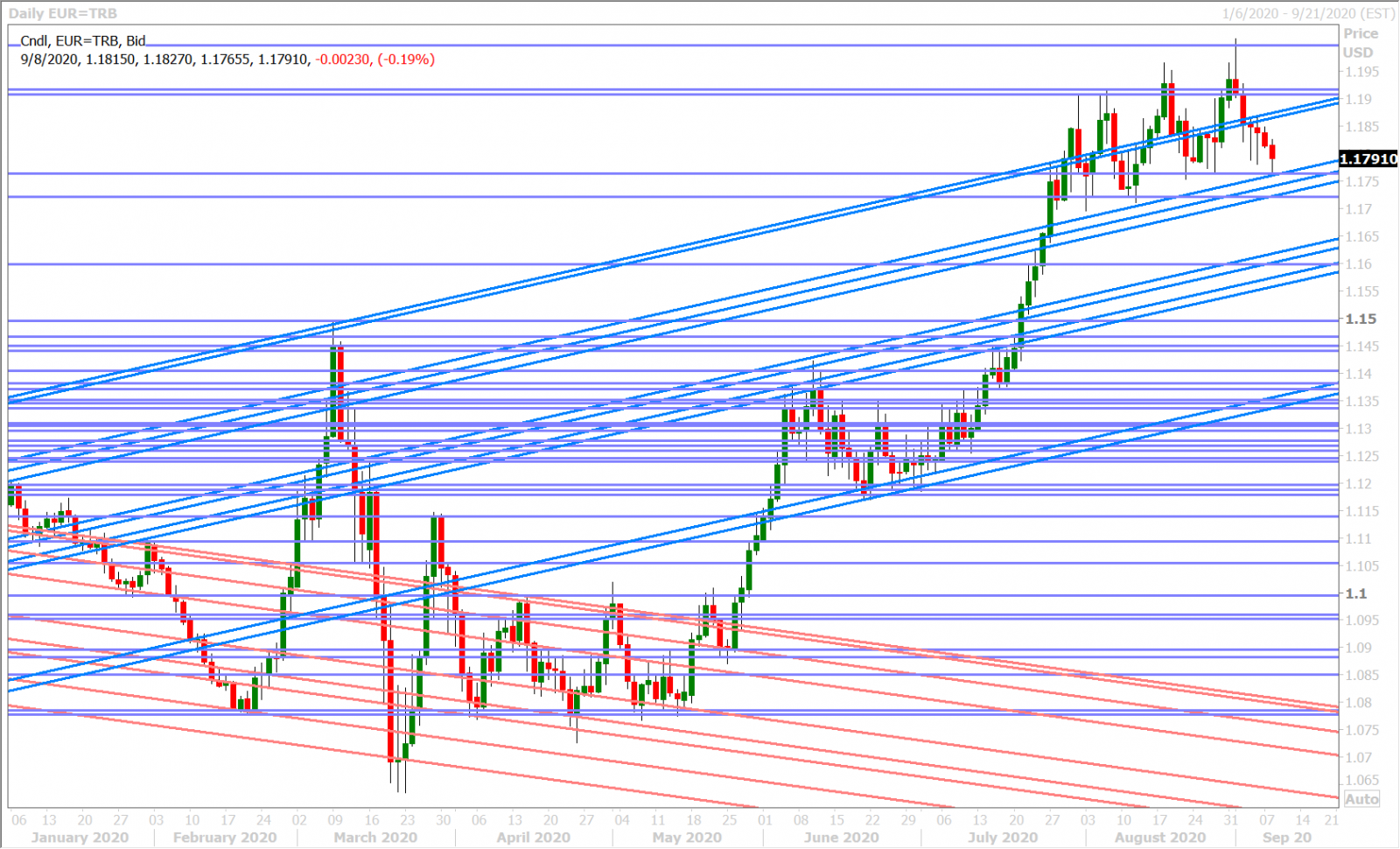 It’s quite amazing how this weekend’s UK news cycle has dramatically put the market’s focus back on repricing-in “no-deal” Brexit risks it priced out over the summer. The speculative fund community learned the hard way over the last few months that it didn’t pay to hang on to overcrowded, Brexit-themed, bearish bets against the pound amidst broad USD weakness, but they’re now getting their hands handed to them again by holding on to a net long GBPUSD position into Boris Johnson’s threat of “moving on” come October 15. One could make the argument that Boris Johnson’s new deadline is a negotiating ploy and that the merits behind the Internal Market Bill are justified and well known, but we don’t think there’s any denying that the marketplace became a little too complacent on the thought of EU/UK negotiators figuring everything out again at the 11th hour.

We think sterling/dollar’s 200pt decline since Friday’s NY close is a fair reflection of the market’s desire to re-price for some Brexit “no-deal” risk, and we’d note Sunday night’s break below the 1.3220-1.3250 price range as a contributory factor towards GBP selling. Over 800M in options will be expiring at the 0.8950 strike in EURGBP on Thursday (80pts below current pricing), which has us wondering if this week’s Brexit negotiations will see some cooler heads prevail. 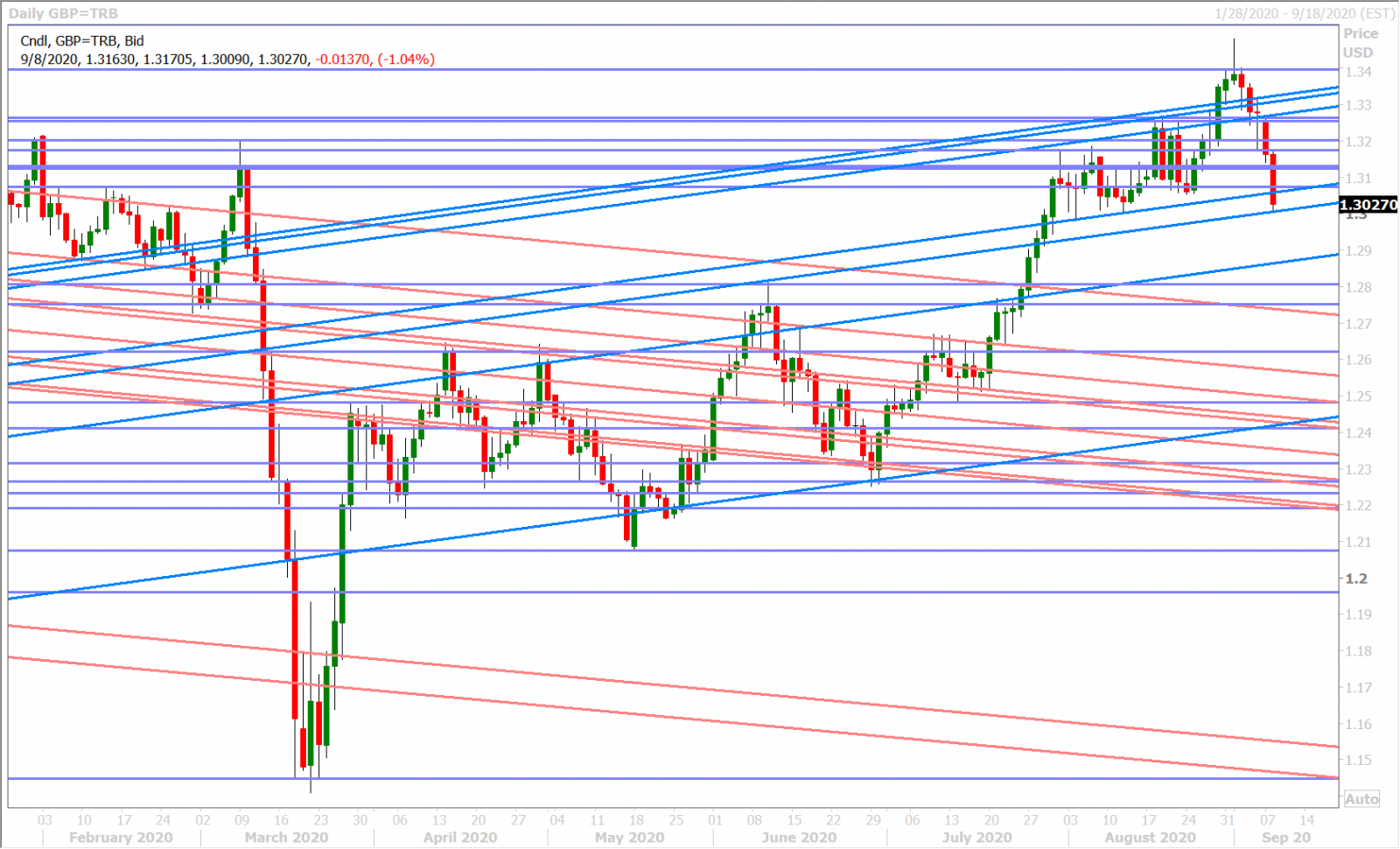 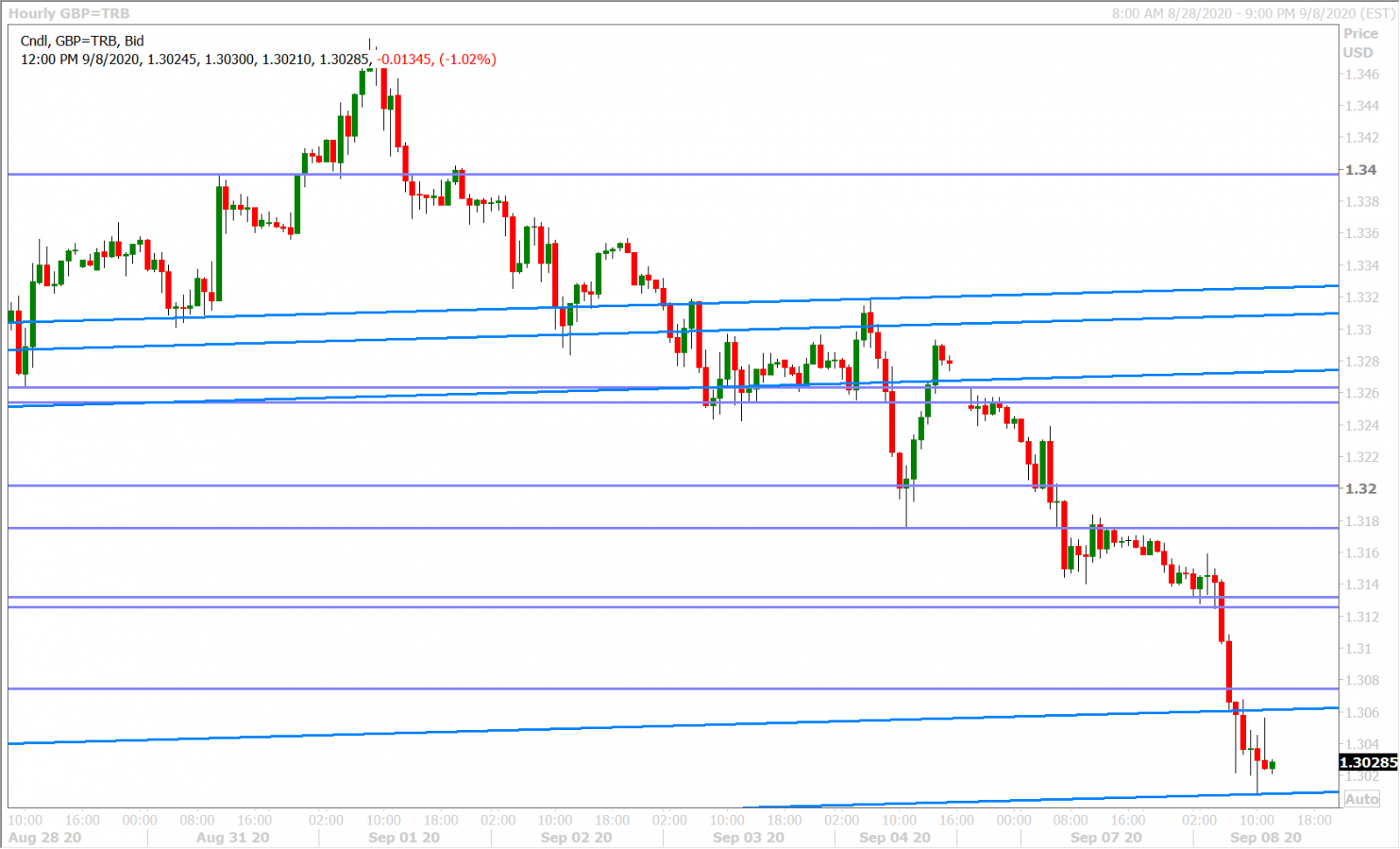 The Australian dollar defended chart support in the 0.7230s on Friday after the Nasdaq rebounded into the NY close, but it’s putting pressure on this support level once again this morning as the tech index opens 2% lower. This week’s quiet Australian calendar should leave traders focused on broader risk sentiment and the multitude of AUDUSD option expiries between 0.7175 and 0.7300. The leveraged funds at CME trimmed their small net short AUDUSD position to flat during the week ending September 1. 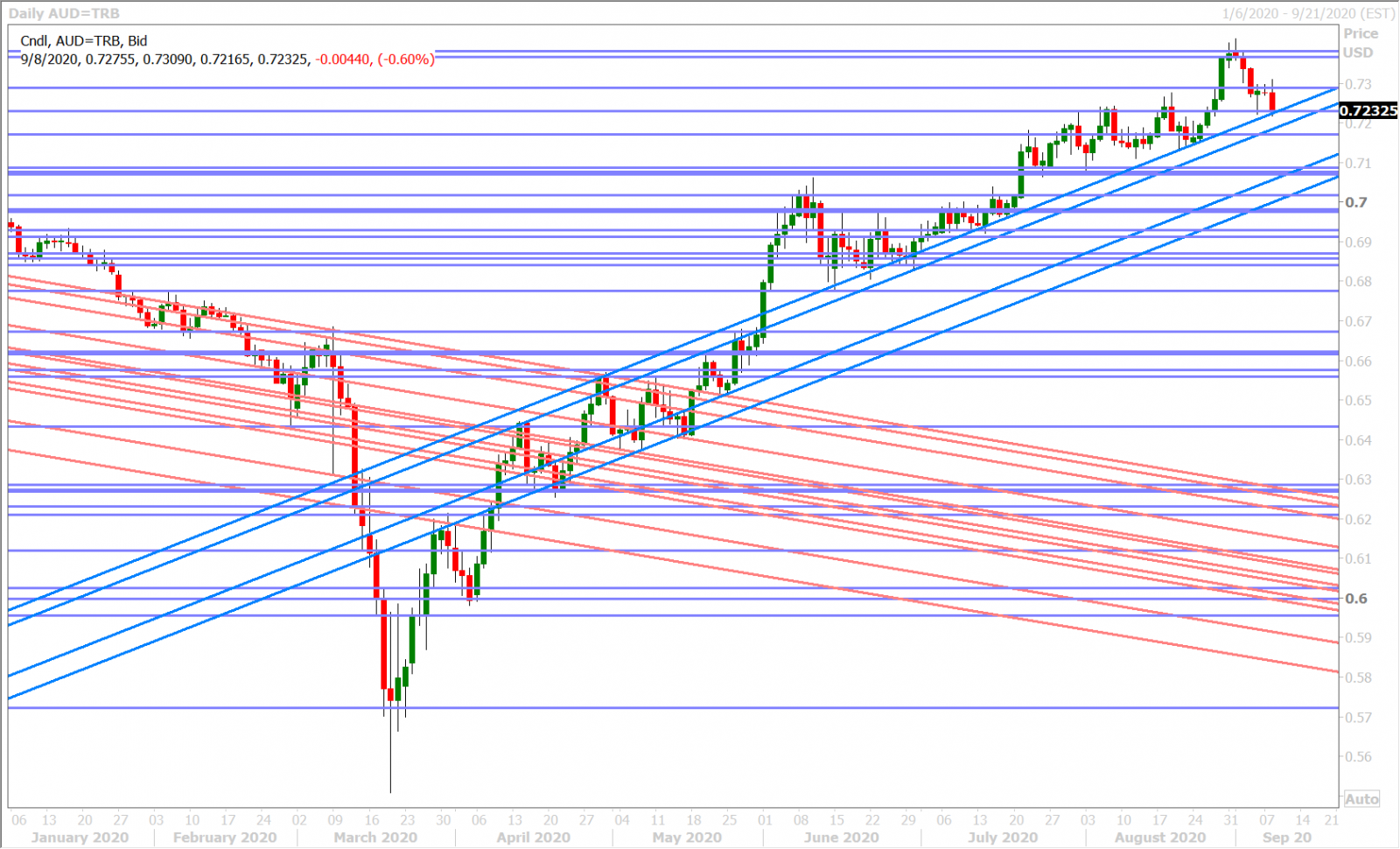 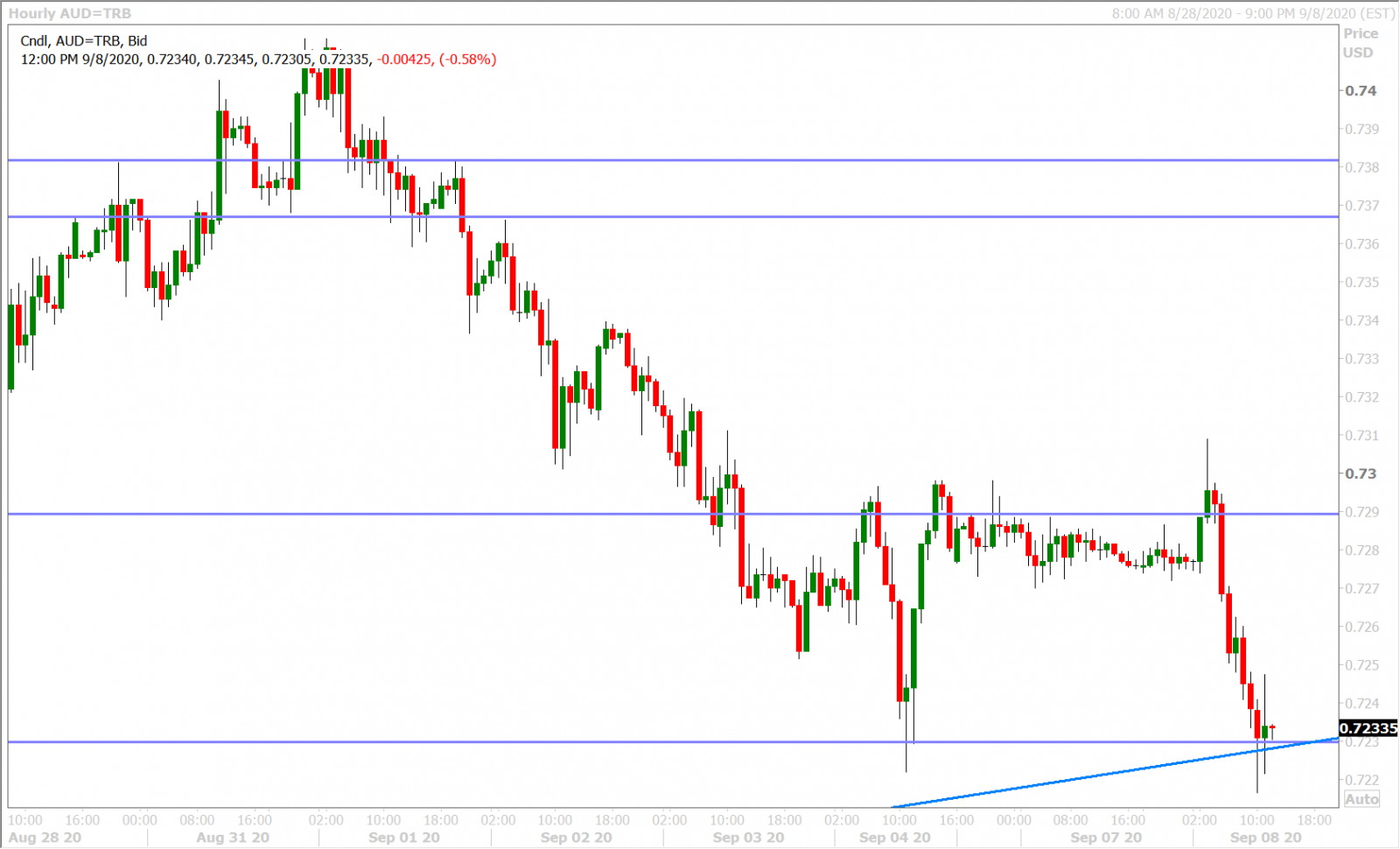 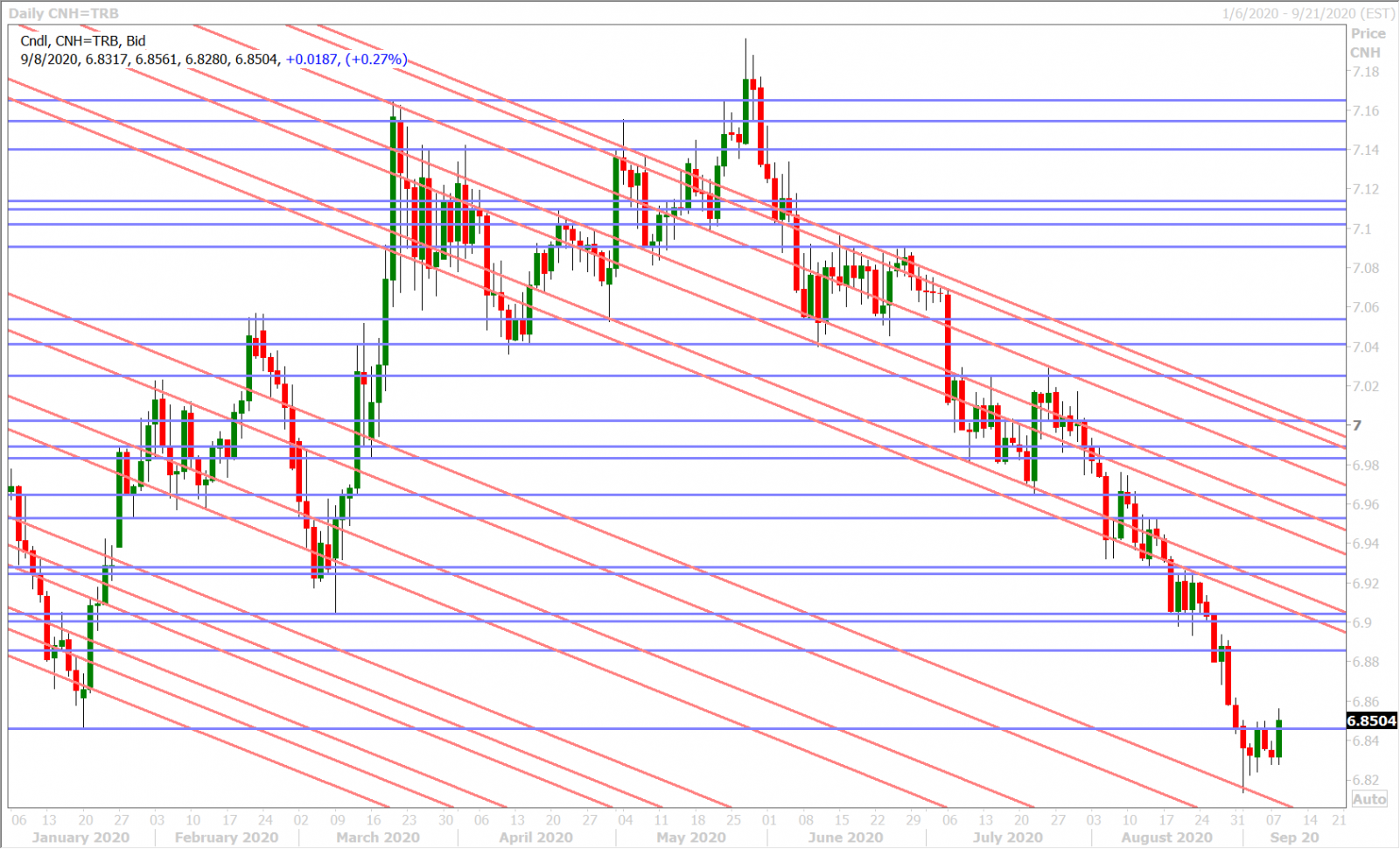 Dollar/yen had an extremely quiet start to the week yesterday as US bond markets were closed for the Labour Day holiday, and while we’ve now seen the market put some pressure on familiar chart support at the 105.90-106.00 area, we’re not really seeing a directional tone to prices.

Chief cabinet secretary Yoshihide Suga has reiterated himself as Japan’s continuity candidate for the LDP leadership race next week but we think markets have now priced in his expected victory. A ton of USDJPY option expiries feature between the 105.50 and 106.50 strikes for Wednesday/Thursday, which could further contribute to the rather dull price action we’re seeing so far this week. Japan reports its July Machinery Orders data at 7:50pmET tomorrow night (+1.9% MoM expected). 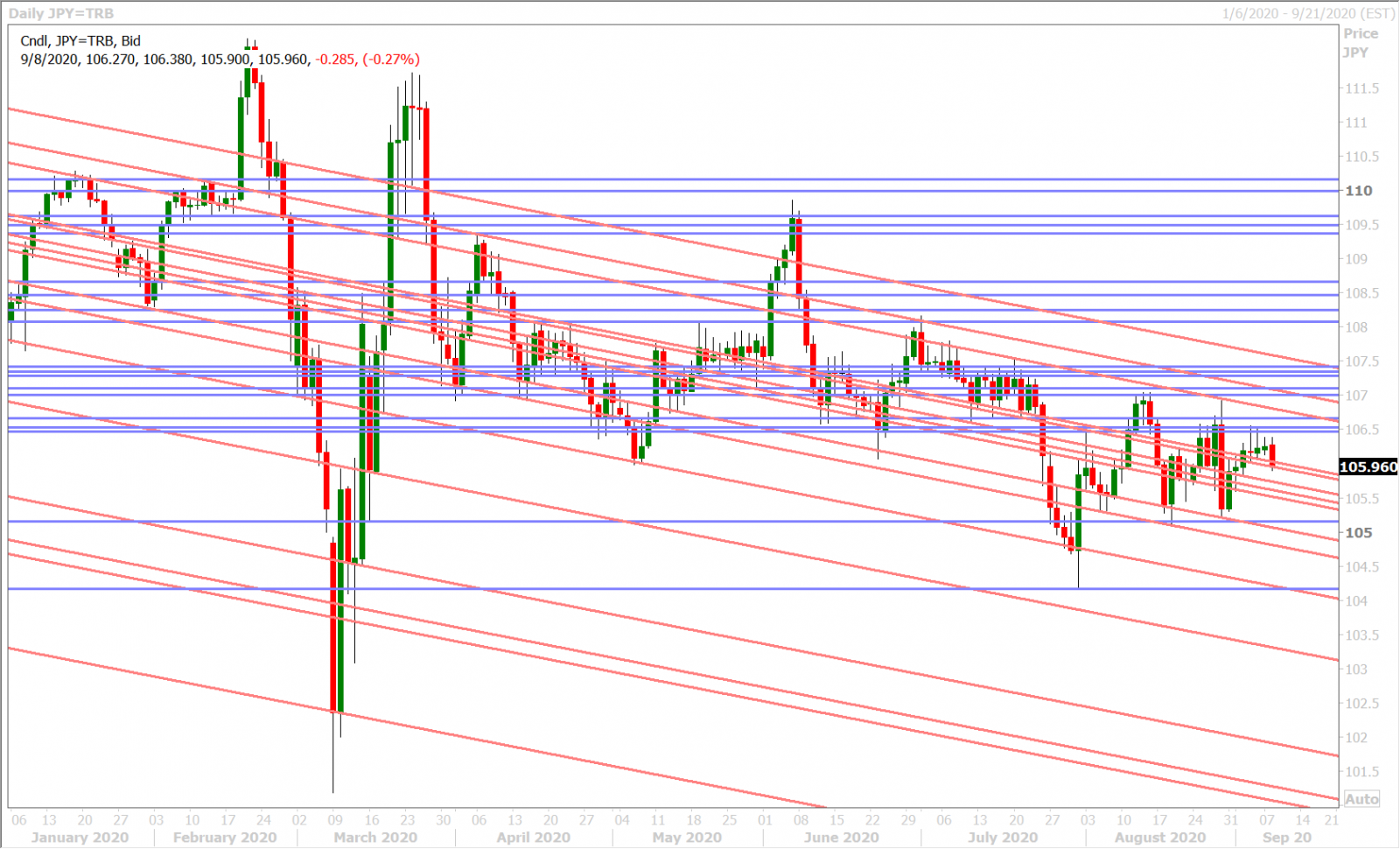 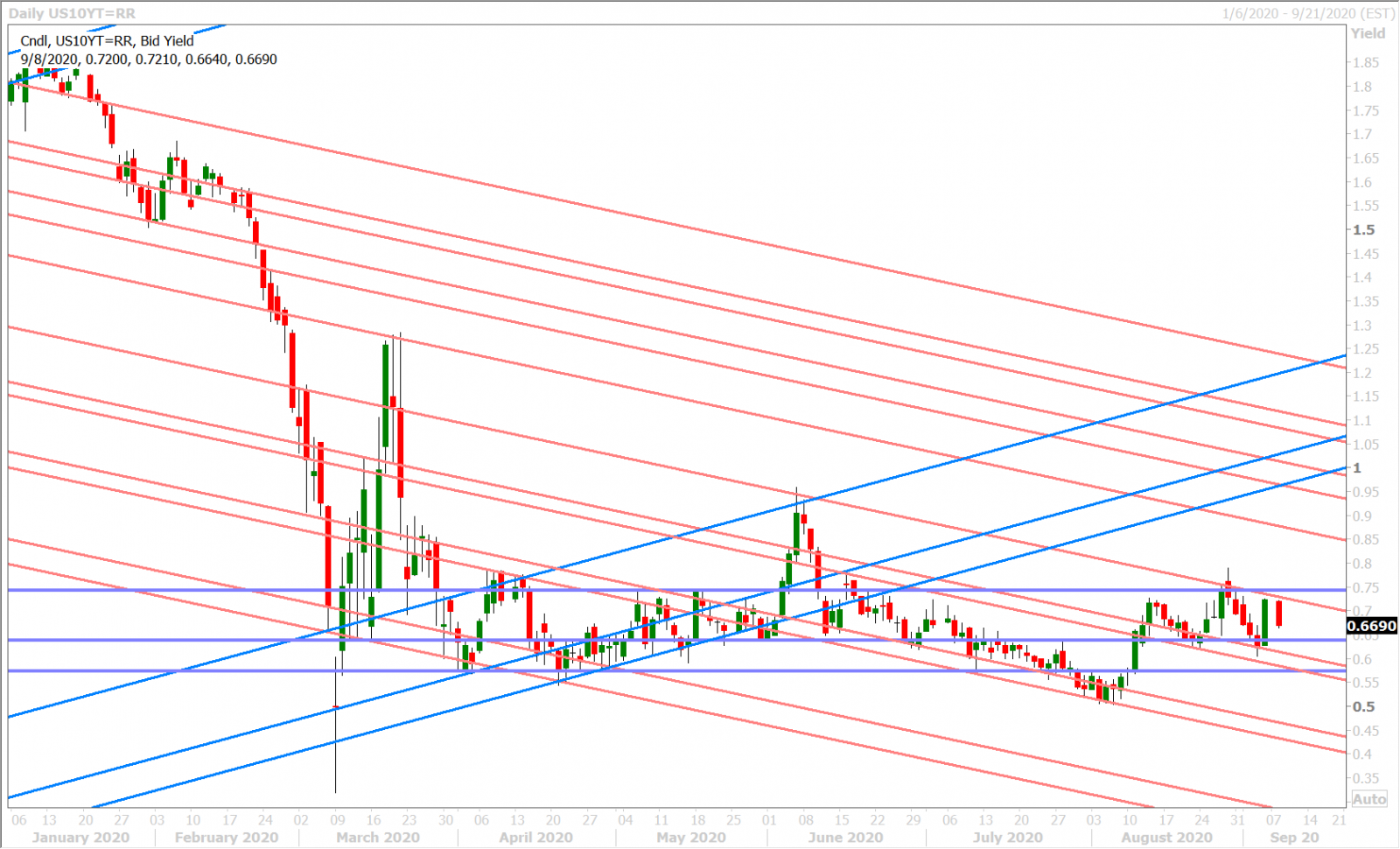 Erik works with corporations and institutions to help them better navigate the currency markets. His desk provides fast, transparent, and low cost trade execution; up to the minute fundamental and technical market analysis; custom strategy development; and post-trade services -- all in an effort to add value to your firm’s bottom line. Erik has been trading currencies professionally and independently for more than 12 years. Prior to leading the trading desk at EBC, Erik was in charge of managing the foreign exchange risk for one of Canada’s largest independent broker-dealers.


Disclaimer: All product names, logos, and brands are property of their respective owners. All company, product and service names used in this website are for identification purposes only. Use of these names, logos, and brands does not imply endorsement.
This publication has been prepared by Exchange Bank of Canada for informational and marketing purposes only. Opinions, estimates and projections contained herein are our own as of the date hereof and are subject to change without notice. The information and opinions contained herein have been compiled or arrived at from sources believed reliable, but no representation or warranty, express or implied, is made as to their accuracy or completeness and neither the information nor the forecast shall be taken as a representation for which Exchange Bank of Canada, its affiliates or any of their employees incur any responsibility. Neither Exchange Bank of Canada nor its affiliates accept any liability whatsoever for any loss arising from any use of this information. This publication is not, and is not constructed as, an offer to sell or solicitation of any offer to buy any of the currencies referred to herein, nor shall this publication be construed as an opinion as to whether you should enter into any swap or trading strategy involving a swap or any other transaction. The general transaction, financial, educational and market information contained herein is not intended to be, and does not constitute, a recommendation of a swap or trading strategy involving a swap within the meaning of U.S. Commodity Futures Trading Commission Regulation 23.434 and Appendix A thereto. This material is not intended to be individually tailored to your needs or characteristics and should not be viewed as a "call to action" or suggestion that you enter into a swap or trading strategy involving a swap or any other transaction. You should note that the manner in which you implement any of the strategies set out in this publication may expose you to significant risk and you should carefully consider your ability to bear such risks through consultation with your own independent financial, legal, accounting, tax and other professional advisors. All Exchange Bank of Canada products and services are subject to the terms of applicable agreements and local regulations. This publication and all information, opinions and conclusions contained in it are protected by copyright. This information may not be reproduced in whole or in part, or referred to in any manner whatsoever nor may the information, opinions and conclusions contained in it be referred to without the prior express written consent of Exchange Bank of Canada.
Tags: USD, GBP, EUR, CAD, CURRENCY NEWS, FOREIGN CURRENCY MARKET ANALYSIS, CURRENCY MARKET RATES
chevron_left Previous Post


Big FX option expiries in play after the payrolls report 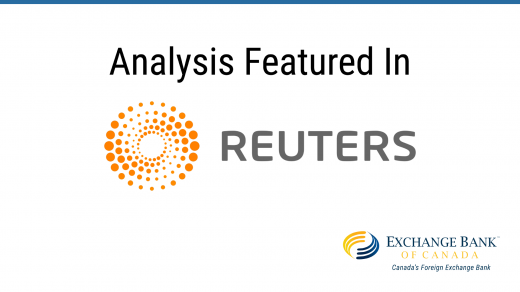 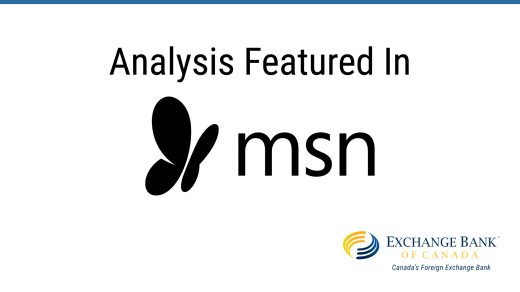 EBC In the News (MSN) - Overheated stock market at risk of bubble in a disconnect from economy, experts say